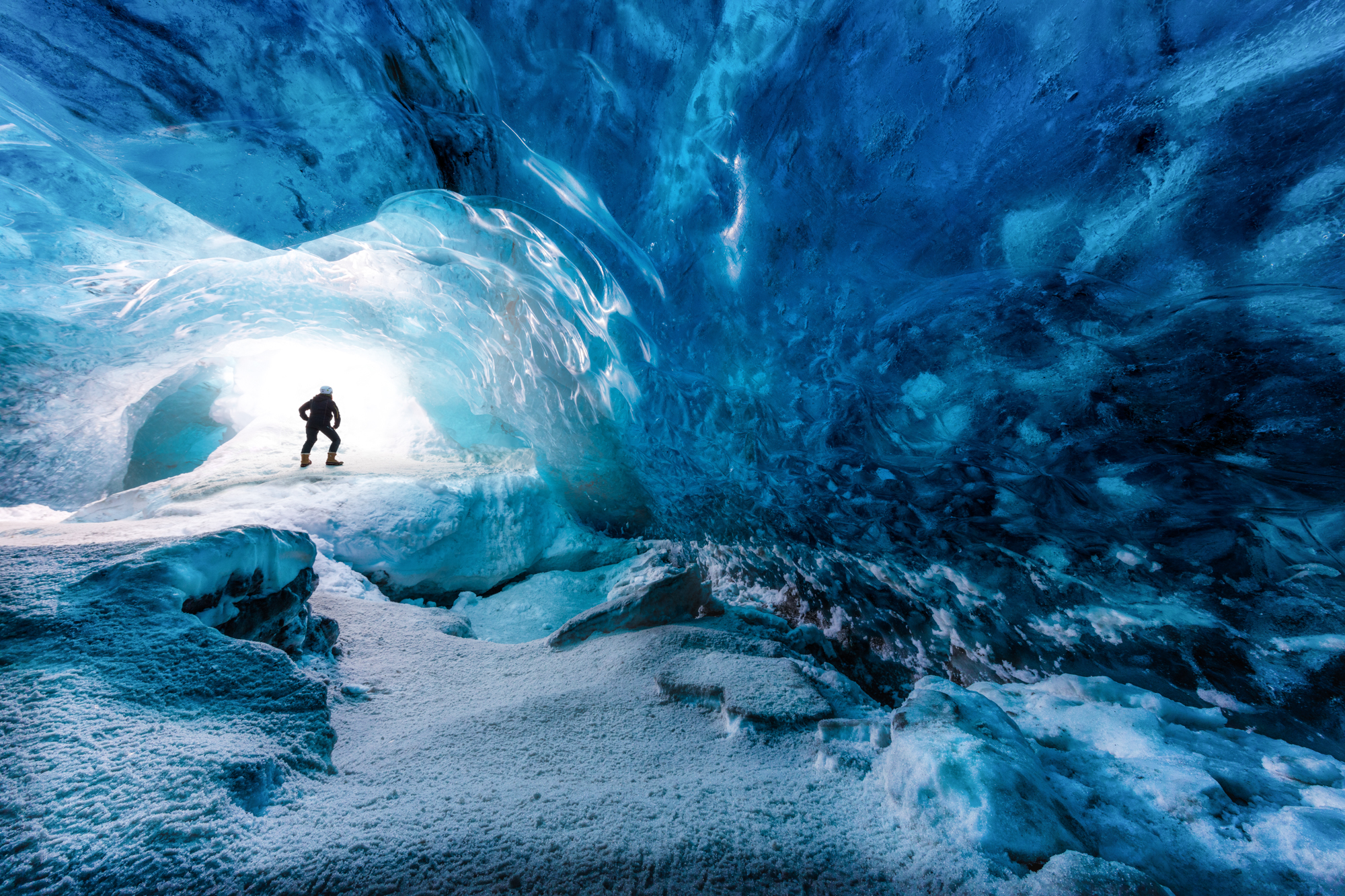 There are not many times in your life, my friend, that you find yourself in an ice cave, well.. unless you are a geologist, or your job involves discovering ice caves or digging glaciers.

How did I find myself in an ice cave? So, until that very day I didn’t know whether we will be visiting one or not.  It is quite a popular thing and you need to book it in advance. And it is not like visiting museum – you need to consult with nature first before going – if it is getting too warm, alas, spring is on the way, it can be that it is too dangerous to be inside and then there is not much you personally can do. We were really lucky to have witnessed this blue beauty because it got closed 2 days later – the glacier started melting profoundly and it was not safe to be there anymore.

Those caves, so that you know, are located in quite random places – this particular one from outside looked just like a heap of snow. I wouldn’t have known that under my feet there is a kingdom of blue ice. But to get to this random place you also have to drive for about 40 minuted (maybe more) into the snow desert safari. In Dubai we have this “adventure” called desert safari, where you are basically in a 4×4 car doing dune bashing, meaning your driver drives like a maniac and you scream while looking at the sand covering the car on both sides. It is maybe a bit less crazy driving in Iceland, but the whole experience was not less crazy whatsoever. We had 13 people in one car (a veeerrrry big 4×4) with the heating system that wouldn’t go off, so some of our group members were literally melting there. I admit I was trying to do my hydrating the body program earlier on and perhaps it was not the best idea when going snow-piles bashing and crawling in an ice cave. However, we all made it there in one piece. I had wonderful time talking to our group leader about his plans on opening his gallery, and having fun of Denny who was melting in the back. It was not as fun for him, I am sure.

On arrival we all received helmets that were obligatory to wear (like they actually going to save you if this thing collapses), but I truly think everyone who was there ended up bumping their head at least once. If someone didn’t… respect, my skillful friends. You don’t really know what to expect when getting down. It all starts quite innocently with the guide telling you – enjoy being in the ice cave, feel it, embrace it, live it, do not obsess about photographing it (which is hard while being on a photo tour). But yeah, there are layers and layers of incredible blue ice. And it is so blue because that is how the sunlight reflects on its surface while going though the thickness of it.

There was one quite big room at the arrival area, and then another smaller one that you had to crawl to through a very thin tunnel of gravel on the bottom and ice on top. It feels very claustrophobic there and even though I don’t have this phobia, it was not such a good idea indeed to go there. It was impossible to take any good photos due to amount of people who were there, I got incredibly dirty, as well as my camera, my tripod got full of small gravel… but in terms of experience, yes, I experienced it.

I look at my photos that I took in the ice cave, and I can give you only one advice if you are ever going to experience it. Take pictures with people in them, because it is impossible to get a feel of how enormous this place is without reference. I have a photo with Medvedik, my travelling companion.

At least it shows somehow how it looks like in there… because the other photos, well, they are just pictures of ice. And no matter what you set your white balance to, it will still be blue.

We had a lot of fun inside the ice cave. It is this indescribable feeling of how much beauty nature can create and how you are just a small powerless human-being surrounded by this absolute magic.

I could see water running down from ice, some people tried to lick it or catch it with their mouth, but I come from Russia and I know exactly how it tastes – no need to try.

The time in the ice cave passed too fast, as everything in life when you are having fun. On our way back the litre of water that I drank before going on this adventure really wanted to get out, so bumps on the road were not appreciated. I guess I was not the only one with this issue, as we had one famous “bathroom related” episode afterwards that ended up in too many jokes, honestly.

Polished off this experience with a lunch in a certain restaurant which had 5 options of arctic char to choose from. Siggi (our driver and tour-leader) was raving about the vast choice of arctic char, but we had some people in our group who never really had fish in their life before. Well, in Iceland you often have no choice but to go with the flow. Sometimes quite literally.

I would like to say thank you for the main photo of this post to my good friend Patrick Di Fruscia, who generously spent his time in the ice cave taking photos of us. He might have called me fat while taking this photo, but I love him anyway 🙂

Thank you for reliving this day with me guys.

I hope you had fun too.

3 thoughts on “What is Down there in the Ice Cave?”