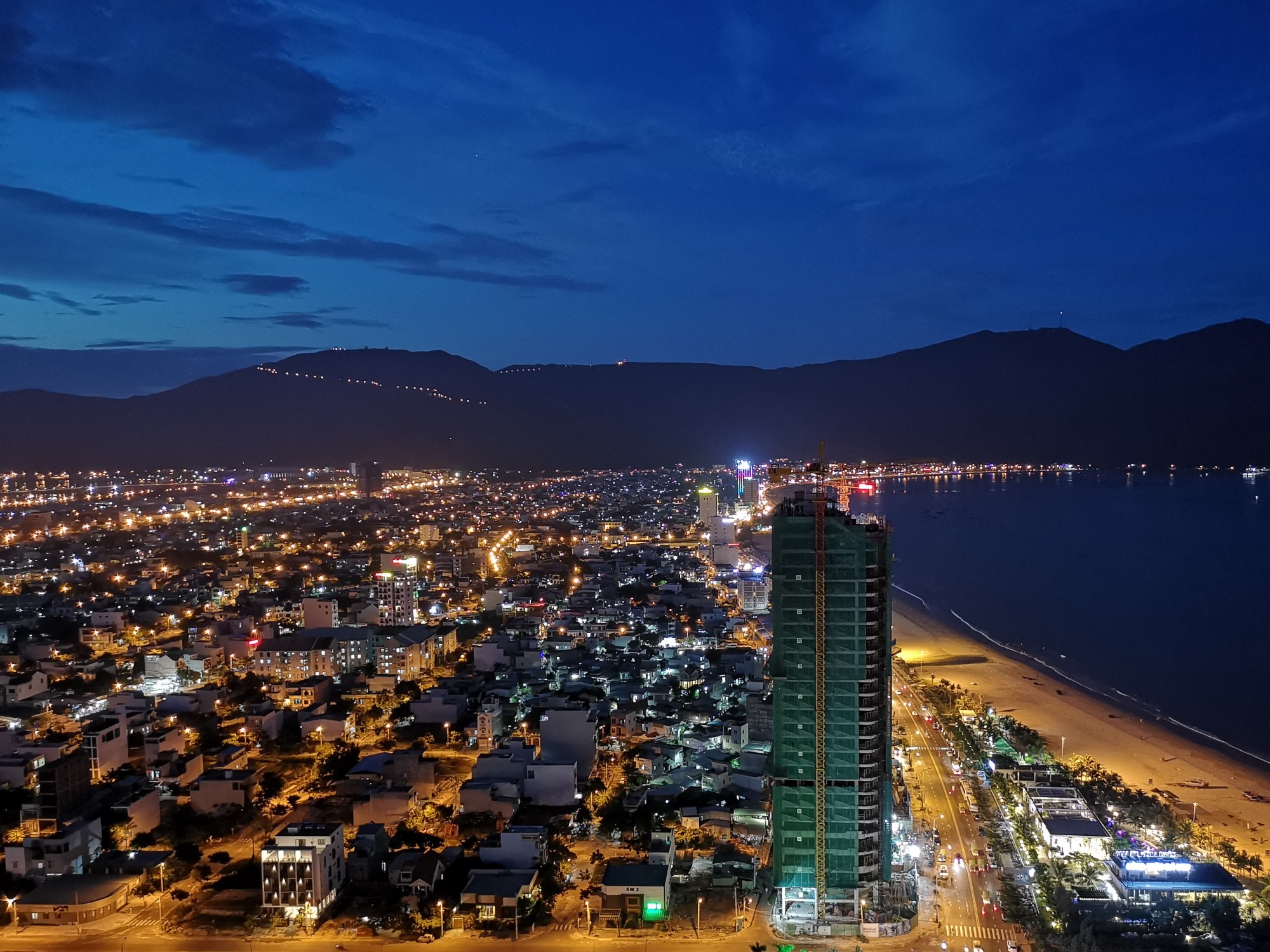 Before going to Vietnam, I didn’t know anything about Danang. In fact it is a coastal city in central Vietnam known for its sandy beaches and history as a French colonial port, but for us, it was the party side of it that swept us away.

The area where we stayed was right next to the beach, which was long and deserted in a beautiful way.

There was also a lot of construction going on, seems like Danang is building up and modernising. It looks stunning at night, especially from a hotel with a pool on 40th floor :p.

Unfortunately the sunsets I have seen in Vietnam were not very inspiring, but the blue hour was beautiful nevertheless.

With the sun down, it was time to go look for a place to have dinner at. We walked around a few streets, peeking into small restaurants with the tiniest chairs in history of chairs, when we heard music playing loudly out of one place sized a little bigger than a general garage in someone’s house. There was a sign above the table saying “happy wedding”, however we didn’t spot any wedding dressed people, nor for that sake any girls at all. It was a party of 20 lads, who were high up in their beer consumption and jolly for the fact that Vietnam apparently won a qualifying game against Bahrain in Asian Football Cup. It just took a moment for us to exchange smiles with the vietnamese guys, and we were immediately invited to join the celebrations and given a beer each…. Most of those people weren’t able to say a word in English, but it didn’t stop us from having a time of our life dancing to the old classics like “One Way Ticket” and “You My Heart, You My Soul”…

The shirtless fellow apparently was a Vietnam war veteran (as actually most of the older people are)… and he challenged our friend Paul to a competition of push ups. The guy must be like 65, but look how ripped he is! Also, notice how in this part of Vietnam they have a tradition just throwing finished cans on the floor, along with the food that they don’t plan to eat any more.

Obviously, it was a friendly competition, and I laughed, and took pictures, and laughed some more.

It was hard to leave this party, but it was time for us to go and actually try to have some food… and now the song One Way Ticket will always remind me of that surreal experience. How incredibly friendly of these guys to invite us to their celebration, how much fun we all had?!

Later on that night, we went to a local club that also played some songs that I was dancing to in 2005 rather than what you hear on the radio today, but we also got invited by some locals to their table and had a fantastic night. Danang was so much more open to receive us without asking anything in return than Saigon, it was like a different world.

It also has the most fantastic and beautiful bridges including the dragon bridge and the one with the hands, that I unfortunately couldn’t take photos of. So if you’re planning a trip to Vietnam I definitely recommend staying in this place for at least a couple of days.

Thank you for reliving this day with me!