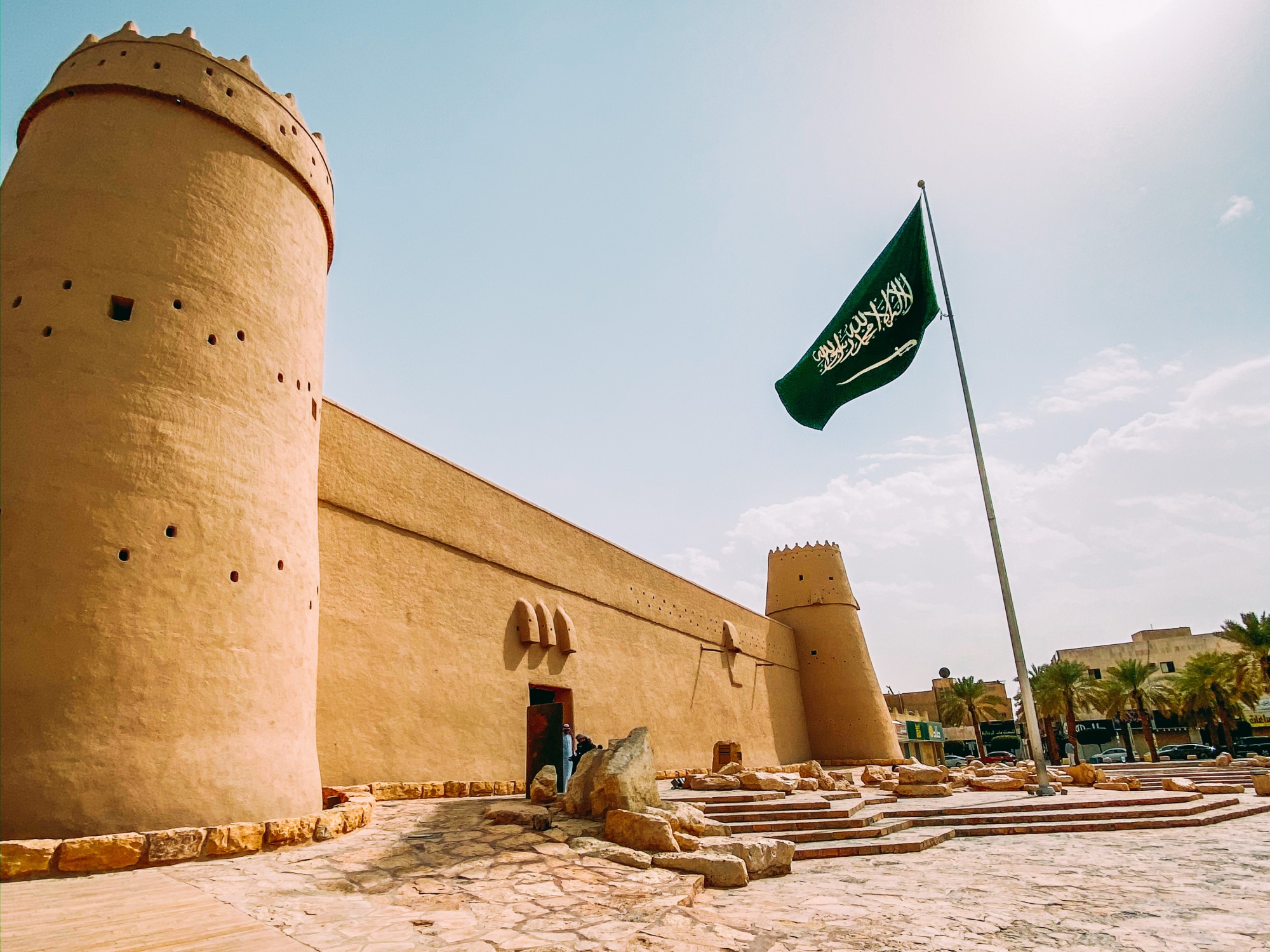 The last day in Saudi Arabia technically started with us still sitting around the dying fire under the large ghaf tree and looking at the stars, followed by a rather quiet drive back to the Intercon through the buzzing streets of Riyadh city. Having returned to “civilization” we still brought with us that fire smell that lingered around for a good week throughout our belongings, until we washed every single thing we had with us that night.

For breakfast we planned to go to a quite famous place called Futoor Fares, or Fares’s Breakfast and thankfully my friend A. made arrangements and booked us a table, otherwise it would have been long and painful to wait for our turn in the queue. Fairouz was once again accompanying us that morning as we enjoyed traditional shakshouka, foul beans, kidneys prepared in a Saudi way and some sort of Saudi granola with honey – everything was very tasty and we even managed to pay for the bill this time, not without a massive argument though 🙂

On this wonderful note, we had to leave A. to do his home chores and us, my husband and I, decided to do some cultural enlightenment and went to visit Al Masmak Fortress – quite a remarkable piece of Arabian architecture, that also can teach you a story about Saudi Arabia’s unification if you are paying attention to the information on display inside.

It is a clay and mud-brick building of about 150 years old, renovated in the 80s and has a collection of marvelous doors of any kind inside. You can also see some old guns, swords and photographs of the prominent members of Al Saud family… but most of all I was encharmed by the building itself.

After visiting the fortress and its souvenir shop, we somehow had a brilliant idea that we should walk to the National Museum now to dive into more culture. The GPS said it was just a 30 minute walk, mostly straight and the weather was just so lovely, but as you probably read from my previous posts walking around Riyadh didn’t teach me anything, or maybe I just didn’t have enough adventures yet.

The area around the fortress comprises of quite a lovely bunch of shops and souq streets, but apparently most of them were closed between 12 pm and 4, but not like we were looking for some shopping anyway.

The combinations of old/sort of new-ish/run down architecture really captured my attention on the way, as well as I captured the attention of many Saudi men who sometimes stopped doing what they were doing completely and twist and turn their necks all the time I was walking past them. After the souq part was finishes, the streets were not pretty any more, they were dirty, and full of men of all kind of nationalities, very few women, a bunch of cats, and a lot of things were shouted in my direction, most of which I thankfully didn’t understand.

A bunch of road had to be crossed while praying for my life, as there were no street crossings, nor there were traffic lights, forget sidewalks. But through the hustle and bustle, and a few stolen street shots, finally we reached our cultural objective – The National Museum of Riyadh.

Inside we learned about the creation of the world, the people who inhabited the lands of what was before Saudi Arabia, lots of rocks of different kinds, ancient poets, pre-islamic Arabia, and obviously a large part of Islamic Arabia, portrayed in a very nice way though… one Saudi guy made sure to go and press on all the buttons to play all kind of prayers and religious videos for us, while he was just a step ahead all the time 😉

You can spend a large amount of time in this wonderful museum that costs only 10 riyals to enter. Going up and down the corridors, watching videos and listening to audio guides, observing the scaled versions of cities and mosques… but it will tire you down as it tired us down as we reached the end of our tremendous Arabian trip throughout these museum’s walls. We spotted a nice looking park situation in the inner courtyard of the museum and were about to embark on a journey of looking for that divine bench to rest our derriers on, when the security person, looking more like an army person, told us that in order to go into this garden we must obtain a permit from the management of the National Museum, which was free of charge and we just must collect it in that direction (he broadly showed us with the palm of his hand the direction we should have gone to get the said permit). My husband and I looked at each other, and said to this noble man : “thanks, but it’s really okay”… so we just went to look for a bench elsewhere. What do you think happened 5 minutes later? The same very guard appeared in front of us, and told us that we have been granted the permission to go into the gardens, but only for 15 minutes maximum and we must be very careful… Welcome to Saudi Arabia! was his closing line, and there was nothing else really to add, and you didn’t have to ask us twice to proceed in the forbidden garden direction.

We didn’t find anything dangerous or particularly interesting in there, and didn’t really get it why it was not allowed to go out there until the other guard appeared and informed us that if we wanted to visit the Murabba Palace, it was closed that day and we must come back another time…. ahhh that’s what it was! All right, enough culture, enough being welcome to Saudi Arabia, time to go home and back to the bubble as many call my home place, Dubai, United Arab Emirates.

Back to the Intercon to collect the luggage and caffeinate a little bit before the long road to the airport, combined with maybe even longer wait for the uber driver to show up – but all went smooth enough and the driver was an old polite Saudi gentleman listening to some classical music, who delivered us promptly enough to the airport. Not without delays we returned to the land of available taxis at every corner, entertainment for all kinds of population and freedom of clothing without the judging looks. A lot of Saudis rushed to the duty-free shop as soon as they landed in, but who am I to blame them for that?

Definitely gained more than I spent in terms of broadening my cultural horizons throughout this trip. Made new friends, bettered old friendships, gave smiles, received questioning looks, realized I need to work more on my Arabic… but had one hell of an unforgettable adventure. Thank you everyone involved, thank you my Bahri friends without whom I would have never even consider going to KSA, thank you for the kindness and your big hearts. I wish you all success and you have a lot of potential, just don’t blow it, please, make it happen the right way, I know you can!

Thank you for taking this trip with me, I hope you had fun. God bless you and take care of yourselves.